Whatever you think of the New World Order, whether or not you think it is just a bunch of right wing drivel, the stuff that they advise you to do to prepare is no less sound advice. My church has been harping on emergency preparedness during this last year like never before. You might want to get prepared for what is to come.  Because things are about to get bad and you need to be able to survive, even if it is a natural disaster, fire, whatever.  God bless you all and God bless America!

I have been on hiatus for awhile but I am back! So just because I wasn’t here doesn’t mean I wasn’t paying attention to the latest news or had no opinion on then. So let’s get started.

This is the Michael I loved and will always love

Let’s start with something we haven’t been able to escape-the death of Michael Jackson. I was a huge fan of his growing up but as we both aged, he seemed to become quite bizarre.  Granted, a lot of people are bizarre but his behavior bordered on the criminal with his behavior towards children. Though he was acquitted of the charges (or were they dropped I forget) there was something unsettling about his admission of sleeping with boys though nothing sexual was going on he said.  Even so, you don’t do that kind of thing.  When he died I was very much shaken. More so for me than for him or even his family. I was shaken because it felt like a piece of my history had died. I was shaken because the 19 year old boy who sung “Off the Wall” was now gone forever.  I was shaken for that 9 year old girl who  truly loved him as much as a nine year old girl can.  It was his memory I mourned, more than the man himself.  Congress wanted a resolution for Michael.  Obama sent condolences. The whole thing turned into a circus with Al Sharpton saying  to his kids at Michael’s memorial at the Staples Center that “your father wasn’t strange.” Yes, he was. Making them wear masks their whole lives is strange. Holding a baby over a balcony is strange. Sleeping with little boys is strange. To deny all that simply because the man is now dead is wrong.  It would have been better to avoid the topic altogether than to willfully lie to his children. Even if you think it will benefit them.

Next, we have a far more important death to talk about the one of Neda. 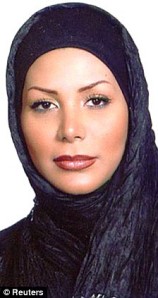 The young woman protester in Iran who was murdered in broad daylight.  Her dying photo plastered across the internet. If anyone should have a resolution for them, it should be Neda, who sacrificed her life for the sake of freedom.  Neda has become the voice of  freedom for Iran, women in particular. Neda was killed after the elections in Iran were called into question.  Her fiance told reporters she was not politically affiliated with either side, she just wanted freedom for everyone.  Unfortunately Neda had the misfortune to die shortly before Michael Jackson and so her death got quickly tossed aside for the more sensational and weird circumstances surrounding Jackson’s demise. Though truthfully, I don’t know how much more sensational you can get than to be shot in cold blood and have it videotaped and sent to YouTube! If only Americans were as bold as Neda.  Maybe we wouldn’t have an imposter in the White House as well.

Honduras-Obama has called the removal of President Zelaya by the Supreme Court  in his country, an illegal action. Well that is not surprising.  This is the same man who thinks our Constitution is a flawed document. This is the same man who refuses to submit his actual birth records to confirm he is eligible for the Presidency. This is a man who never met a communist he didn’t like. This is a man who has taken over GM, the banks and now is trying to take over health care in this country.  So it is no surprise he aligns himself with the likes of Hugo Chavez, Fidel Castro and other communist dictators. There was nothing remotely illegal about the ousting of Manuel Zelaya.  Zelaya is accused of trying to revise the Honduran Constitution while still in office, he says he was only doing opinion polls. Yeah and North Korea wasn’t really testing their missiles a few months back.  They were just testing their satellite systems. And if you believe that, I have a bridge I want to sell you.

Okay so that is some of the big stories that have happened since my hiatus. I promise next time I won’t be gone so long.