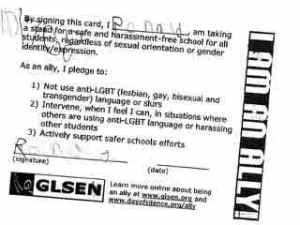 The whole time during the Prop 8 campaign we told parents that should Prop 8 not pass that gay marriage would be mandated in the public schools. We were told we were lying and that public schools weren’t mandated to teach anything about marriage. But that didn’t stop a school in San Francisco from taking its students to a lesbian wedding. We couldn’t have gotten better validation for our cause than that. Obviously, this wasn’t the smartest move right before an election where we were warning about this exact thing. Now here it is only a few days after the passage of Prop 8 there is another incident at a California public school. Kindergartners were given pledge cards. (Now remember we were told kindergartners would not be taught about homosexuality…..so much for that little lie!)

“The pledge cards were produced by the Gay, Lesbian and Straight Education Network, or GLSEN, and featured oaths that students would not use “anti-lesbian, gay, bisexual and transgender language or slurs,” that students would intervene on behalf of homosexual students when possible, and that they would actively support safer schools efforts.”http://onenewsnow.com/education/2008/11/03/kindergartners-given-homosexual-pledge-cards#.UtCSXOKwV8E

This recent incident only solidifies our argument about homosexual indoctrination within the public school system.  To give a card like this to  a bunch of five year olds who can’t read or write is tantamount to coercion.  Then to make these same children to take on adult responsibilities by  telling  them to “actively support safer schools efforts”  and  “intervene on behalf of homosexual students when possible” is outrageous. And how exactly is a 5 year old supposed to “support safer school efforts?” These kids are barely out of diapers and you want them to “intervene on behalf of homosexual students when possible?” It is unconscionable that such material would be distributed to children who don’t even understand what sexuality is let alone homosexuality.  While the school agreed with the parents this time out how long will it be before this kind of  blatant mental molestation of students’ mind and morals are commonplace?

As mentioned before GLSEN  was responsible for distributing the cards to the school.  Don’t be fooled by the straight part of its name  of this organization,  straight kids are of little concern to this organization.  It is nothing but a deliberate fabrication to dupe people into thinking this is an all-inclusive organization.  GLSEN has no right to make policy for any public school.  Yet that is exactly what it does.  This comes from their website: “Just the Facts” includes the most recent information from professional health organizations, as well as up-to-date information on the legal responsibility of school officials to protect students from anti-gay harassment.

“Just the Facts” has been mailed to all 16,000 public school superintendents in the United States.  That is right-ALL 16,000 PUBLIC SCHOOL SUPERINTENDENTS! The evidence continues to mount that actively recruiting children into the homosexual lifestyle will not only be tolerated but advocated and mandated.

It is time parents woke up and realized this  is not some benign lifestyle choice.  Homosexuality is deadly.  Dr. John Diggs is a physician and has written extensively on the physical consequences of homosexuality.  The list of STDs that gay men acquire grows longer everyday.  Diseases once thought of as eradicated are now resurging. It is no longer about accepting another version of “love” but about saving lives.  When you have people who intentionally infect themselves with HIV calling themselves “”bug chasers”, something has to be done to stop them. When you have the “gift givers” intentionally spreading the disease, we have to stop them.  When we have governmental authorities giving gay kids the finer points of “cruising” for anonymous sex with older men, something has got to give.  (Go to Mass Resistance to read more about the Little Black Book for Queers in the 21st Century-it is pornographic and repugnant!). It is not even about safe sex.  Because there was never any such thing! You don’t make money off healthy people. You make money off AIDS, STDs, pornography, hospices, medicine and of course-death! If people would stop being swayed by emotional  outbursts of inequality and truly take the time to see just what they are supporting,  they gay movement would be crushed.

As it is now, the people who lost on Prop 8 are out in the streets demonstrating.  While some might see it just as the losing population making a public redress to the state that “denied them their rights” it also smacks of desperation. They have even taken to rioting at the Mormon temple.  The gay community always resorts to hostility when not given their own way.  Storming our temple will not sway us.  Mormons have always endured through the most arduous circumstances.  Whether it was trekking across the country from Missouri to the Salt Lake valley and doing it through the bitter, cold winter months or our prophet being tarred and feathered, unjustly imprisoned and eventually killed, we are not fair weather believers and nothing we will endure at the hands of these people will make us turn back.

Our children deserve better than to be thrown to the wolves.  They are not guinea pigs in the liberals social engineering agenda. They are children and deserve to have their  innocence intact for as long as they can. Life will kick them down soon enough, we don’t need to rush the damage. And allowing children to  engage in any sexual  behavior-straight or gay-before they are old enough to realize the consequences  of their actions is cruel and wrong! Parents the fight is just beginning  but we are fighting  for something greater than they are.  They are fighting for “benefits” aka money! We are fighting for our God and our children.  We have more to lose and more to gain .  Let’s keep that in mind as we continue to press on.  And as long as we stick together will stand victorious! That’s not my promise, that’s God’s!

4 thoughts on “Pupils, Pledges and Propaganda”